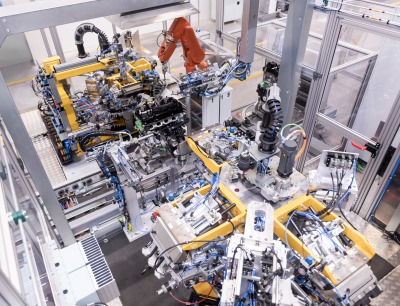 The commissioned Kuka team of experts, based in Bremen, Germany, specializes in assembly and test systems for powertrain assemblies for automobiles and trucks - such as engines, cylinder heads, axles, transmissions, and steering systems. The Kuka team invested two years in the conception and design, leading to the successful commissioning of the test system. "With this know-how, we help our customers to achieve high volume and variant flexibility with low fixed system costs.", says Nils Priebe, Head of Sales & Project Management Test Systems at Kuka Assembly & Test in Bremen. "The special feature of this station: the possibility of converting it for future engine variants in ever shorter conversion periods.”

The system includes a turntable concept consisting of two rotary indexers to ensure max-imum variety. For this purpose, a turntable was mounted on both the inlet and the outlet side of the engine with eight different adaptation sides for sealing. This concept allows the testing of all three and four-cylinder engine generations of the last few years and thus maximum flexibility.

The testing of the different engine generations is carried out with two different methods. The oil and water cavity of the engine is tested with compressed air. Whereas the fuel rail uses helium for testing. The leak test with helium offers a very efficient test for small leakage rates with high reliability, independent of temperature and humidity. Here, the fuel rail is first filled with 10 bar helium to detect coarse leaks. At which point, our sniffing robot equipped with a sniffer lance, checks all screw connections after a penetration time. This concept allows to check screwed joints not only selectively, but also semi-circularly with smallest distances and thus guarantees high quality at shortest cycle times.