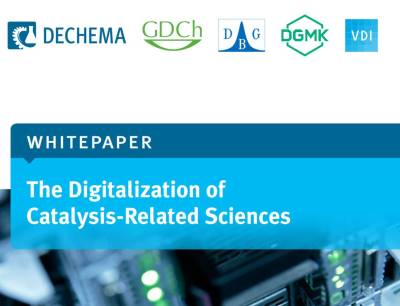 Unlocking the enormous wealth of catalysis research data: This is the aim of a new initiative of the German Catalysis Society (GeCatS). In the recently published white paper "The Digitalization of Catalysis-Related Sciences", experts from academia and industry outline how "digital catalysis" can accelerate research processes and lead to new insights.

Catalysis is a key technology. Around 95 % of all chemical products come into contact with a catalyst at at least one point in the production process. Modern catalytic processes are also indispensable to meet challenges such as the production of fuels or chemicals from renewable energy, for pharmaceutical production or the replacement of fossil resources with biomass.

This makes the rapid and systematic development of new catalysts and catalytic processes all the more important. Digitalization can make an enormous contribution to this: Bridging the gap between theory and experiment not only increases the fundamental understanding of the catalytic processes, but process development can also be significantly accelerated.

This requires uniform data formats and the development of information architectures that facilitate the storage and exchange of data and meet the FAIR principles ("Findable, Accessible, Interoperable, and Re-usable"). The common formats should also enable data analysis using state-of-the-art artificial intelligence methods.

This research data infrastructure has to be user-oriented and free of bureaucratic hurdles in order to reach broad acceptance of and participation in "digital catalysis". This approach of "data sharing" means a cultural change for the catalysis community. If it is successful, the scientific community will have a huge wealth of data at its disposal. GeCatS regards such a central national database with joint access as an opportunity to harvest maximum value from this data.

The whitepaper outlines development needs and development paths, but also analyses potential hurdles and oultines necessary research funding measures l for transformative implementation. The German Catalysis Society GeCatS is the platform for the entire German catalysis community in the field of research and application. It has about 1100 members from industry and academia. The German Catalysis Society is supported by Dechema, VDI-GVC, GDCh, DGMK and DBG.

The White Paper is available free of charge here.

“Security” at a glance: New white paper from Pilz

Sesotec White Paper: Use of recyclates in plastics processing

Sesotec welcomes a new Vice President of Sales for Plastics