The battery that breaths 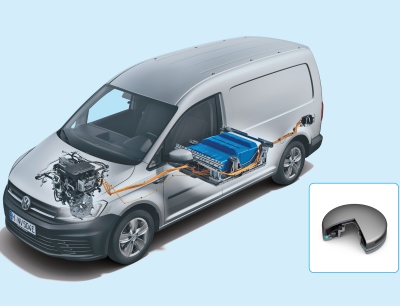 Batteries for electric cars require both pressure compensation during normal operation and emergency ventilation. Freudenberg Sealing Technologies’ Diavent component combines these two functions in a single, advanced design.  Now this solution will help make the batteries installed in the Abt e-line e-Caddy and Abt e-line e-Transporter, two small Volkswagen cargo vans that are popular in Europe and Mexico, more reliable and safe.

More and more cities are considering more stringent access restrictions for vehicles with combustion engines. Abt e-line has partnered with Volkswagen Commercial Vehicles, a brand of Volkswagen AG, to produce all-electric e-Caddy and e-Transporter vans to deliver emission-free transportation and passenger movement in urban areas. Abt e-line designed the battery system used in the vehicles with urban use in mind. It is important that the battery system restrict the payload and transport volume as little as possible, for instance. This was achieved by using a steel housing with a very thin wall, among other design measures. The thinner the battery housing, the more important it is to have a well-functioning pressure compensation system. It ensures that the housing does not deform when the air pressure changes during uphill and downhill driving. In addition, every traction battery must have an emergency ventilation system. If a lithium-ion cell is damaged, it can get very hot in a short period of time. This produces hot gases that must be vented very quickly. Freudenberg Sealing Technologies’ patented Diavent pressure compensation element handles the technically-demanding task of managing both functions with a single component and is now being used by Abt e-line in two series vehicles for the first time.

The combination of pressure compensation during normal operation and emergency gas release in case of an emergency is challenging because the air volume differs greatly in these two cases. There is also a conflict of objectives between high air permeability and sealing against spray water, when using a high-pressure cleaner, for example. In response, Freudenberg Sealing has combined two nonwovens with different properties in Diavent. The water-repellent nonwoven element on the outer side enables air exchange of around 21 liters per minute at 100 millibar differential pressure and is water-tight up to a water column of 100 mm. If the water pressure rises above this, the outer layer is temporarily penetrated by water so that the second nonwoven layer retains a water column of up to two meters by experiencing a reversible swelling effect. In these situations, no water can enter the housing.

In an emergency, degassing is enabled by an umbrella valve arranged in a ring around the nonwoven. It reliably opens as soon as the pressure in the housing exceeds atmospheric pressure by more than around 50 millibar and can then drain off 18 liters of gas per second at 300 millibar. One major advantage of the Freudenberg solution is that the umbrella valve then closes. In practical terms, this facilitates the safe removal of a damaged battery. Bursting foils and discs, on the other hand, which were frequently used in the past, are permanently destroyed after the release. Freudenberg engineers were able to prove that these specifications are met in extensive test series. To ensure 100 percent quality assurance, the company invested in new test equipment that enables the actual air volume flow rate to be measured accurately.

Series production has already started after a development period of only one year, during which time Abt and Freudenberg Sealing Technologies worked together very closely. “The pressure compensation element is a small component that is invisible to most customers,” explains Christoph Bergmann, Managing Director of Abt e-Line GmbH. “Nevertheless, its flawless function is of extremely important to us. Therefore, we are pleased to have found a supplier that works as flexibly and professionally as Freudenberg Sealing Technologies.” The collaboration is not limited to Diavent, however. Freudenberg Sealing Technologies will also be on board the e-Caddy in the future with the seal for the battery connector plate. “Abt combines extensive experience in electric mobility with a willingness to innovate and speed,” notes Michael Schuhmann, who is responsible for cooperation with customers from the New Mobility segment at Freudenberg Sealing Technologies. “This is a challenge for us, but it also promotes the change towards a broad product portfolio for electrified vehicles,” he adds.