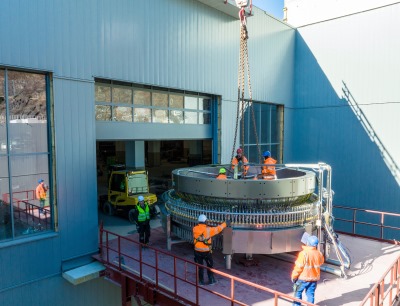 The German brewery C. & A. Veltins ranks among the most technologically advanced privately owned breweries in Europe. To ensure that remains the case, the company’s leadership have been channelling a steady stream of investments into their brewery. At present, the name of the game is growth - innovation - flexibilisation, which is supported by Krones with two new returnable-glass lines.

Quite a lot has been happening on the premises of the C. & A. Veltins brewery in Grevenstein since 2020. A building with six levels is currently under construction. The equipment to be installed there includes two filling lines, and moving in machinery has already been in full swing since early March. Cranes are being used to lift the first Krones machines (weighing quite a few tons) for the new returnable-glass line up to Level 5, to a height of 15 metres. This filling line is rated at 50,000 bottles per hour and will in the autumn of 2023 be followed by the installation of a second line able to produce up to 80,000 glass bottles an hour.

While the second line is intended to replace an existing line, the first one is required to raise flexibility because the brewery has over recent years been offering an increasingly diversified range of products and there has been growing demand from retailers for the Veltins, Grevensteiner and Pülleken beers - bucking the current trend on the beer market. “It’s especially in the spring and summer months, the peak season for beer, that we need more leeway with filling capacities to respond more flexibly to market requirements. The new lines will have a noticeable positive effect on our operations,” says Peter Peschmann, Technical Director at Brauerei C. & A. Veltins.

The first bottles are scheduled to come off the line quite soon, in mid-2022. The 50,000-bph line handles the brewery’s entire bottle range, with a focus on Steinie bottles. It includes a Linaflex pasteuriser for the beer-based mixed drinks and otherwise machines identical to those in the second line to be delivered in autumn 2023. There is one special feature, though: In order to achieve the high speed of 80,000 bottles per hour, the second line features twin-machine arrangements, meaning two each of filler, labeller and packer, each of which can handle a minimum of 40,000 bottles per hour. The Lavatec D5 bottle washer is the only unit in this line able to handle up to 96,000 glass bottles an hour in one machine. It is thus among the biggest of its kind ever built by Krones. Further record-size machines are those tasked with unpacking the empties and packing the filled bottles: The Linapac II installed in the 50,000-bph line, for example, is also one of the biggest in Krones’ portfolio.

The other machines, too, include quite a few technological highlights, like the Linatronic AI that employs deep learning technology to inspect the cleaned empties. Not only does this machine detect preprogrammed error types like chipped-off glass fragments, thanks to artificial intelligence it is also able to learn new types over its operational lifetime, which results in significantly enhanced inspection quality. Moreover, objects like water droplets are reliably detected as such, thus reducing the quantity of erroneously rejected bottles by about 50 per cent. All three fillers also boast an innovation: They are among the first machines to feature a new type of filling valve, enabling the bottle to be directly flushed with CO2 through the filling-valve probe. This substantially reduces CO2 consumption. The machine visualisation system includes yet another premiere: Both lines are among the first in the Krones world that will feature Connected HMI throughout. This new generation excels in terms of its state-of-the-art user interface in hygienic design and makes for maximum networking between machines and higher-order IT systems.

The delivery of the first machines marked the start of installation of the new building’s “interior fittings”. The 50,000-bph line is scheduled to upsize production capacities of the Grevenstein-based brewery in the second half of this year, with the second line to follow in 2023. Just in time for the tradition-steeped C. & A. Veltins brewery’s next highlight - its 200th anniversary in 2024. “We took a long, hard look at numerous competitors and the proposals submitted, and then decided to go for the attractive overall concept from Krones. Now we look forward to working with the new lines which will render us fit for future purpose,” says Peter Peschmann.

Krones and Stadler are turbo-starting a strong closed-cycle economy

Sesotec innovation in metal separators for the meat processing industry

Latest microsystems from Fraunhofer IPMS at the Sensor+Test 2022

Automatica 2022: Summit event highlights megatrends for the future of robotics and AI