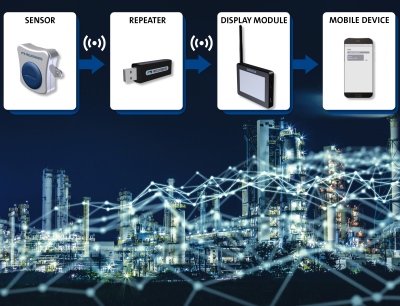 An innovative optical sensor from Freudenberg Sealing Technologies enables the early detection of leaks in industrial plants. The “LeaCo” monitoring system is easy to install and offers a particularly good solution for retrofitting existing production facilities and test stands. Smart factories do more than increase productivity - they also help reduce environmental damages. Along these lines, it is important to immediately detect and automatically report any leaks in tanks, pipes, pumps and valves. According to the vision of Industry 4.0, damages caused by any kind of leaking liquids are a thing of the past. But concepts for smarter factories reach their limits when it comes to retrofitting production facilities that have existed for years or even decades. This is why Freudenberg Sealing Technologies has now developed a solution for reliable leakage detection that can be flexibly retrofitted with minimal installation effort.

The sensor, developed jointly with the Freudenberg Team in Switzerland, can be attached below any possible outlet area - such as a flange or valve - and eliminates the need to make any structural changes to the system itself. If even a few drops leak during the operation, gravity will make the liquid land on top of the sensor, which consists of a replaceable nonwoven material. Just like in a sponge, the liquid then spreads evenly across the material, which is continuously monitored by an infrared laser. The liquid causes changes in the refractive behavior of the laser light on the surface of the nonwoven material - and it won’t even take two minutes for the sensor to sound the alarm. The detection works for any liquids, including water, chemicals, oils or fluids of any kind. The data are transmitted on the broadly used frequency band of 868 MHz, appearing on a display module that was also developed by Freudenberg. A single display module can be used to pair and monitor up to 40 sensors. In addition, the alarm can be automatically forwarded to specified smartphones or tablets via SMS. In larger plants, a repeater can be used to amplify the signal.

A major advantage of the “LeaCo” leakage monitoring system is the simple installation and activation, which can be easily performed even by small and mid-level companies without their own IT specialists. The sensor is paired with the monitoring display in just a few steps. Then the sensors are attached either with two screws or a magnet integrated into the sensor housing. A standard lithium button cell reliably provides power for about five years. Since the sensor is programmed to send a control signal every 30 minutes, any failure will also automatically trigger an alarm. During the development phase, Freudenberg Sealing Technologies tested the monitoring system at its own drive test facility in Weinheim, Germany. The test rigs, where sealing concepts for electric drives are tested for durability, among other things, sometimes run seven days a week. “It’s evident that the `LeaCo´ concept can lead to a much more carefree test rig operation when no staff is present,” reports Freudenberg technology expert Wulf Geiselhart. “And that’s exactly our goal: So operations managers can leave for the weekend without worries.”