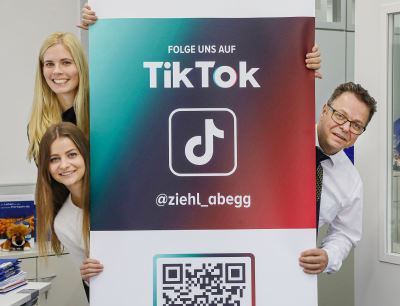 The motor and fan manufacturer Ziehl-Abegg has picked up two prizes at the German Awards for Online Communication (DPOK). The Hohenlohe team entered the competition with the company's own Tiktok channel. “We are particularly pleased about the win in the 'Industry and Mechanical Engineering' category,” says member of the Ziehl-Abegg Executive Board Joachim Ley. The jury was also impressed with Ziehl-Abegg's Tiktok concept in the “Campaign on a small budget.”

With a jury of over 40 members and more than 500 submissions, the German Awards for Online Communication 2022 is one of the top awards in the German-speaking world. Competition entries included: contributions from agencies, government departments, organizations and companies. All submissions had been assessed in advance, with the finalists then having eight minutes in Berlin to demonstrate what sets their own project apart from the others and makes it the clear winner. The DPOK also provided time for networking. “Working together with the influencers from Deutsche Telekom and the Berlin Police Department, we agreed to film Tiktok on a joint basis,” says Rebecca Amlung. She's the creative force on the Tiktok team. "At DPOK, we were frequently approached by other companies asking about our Tiktok approach," says Amlung. What distinguishes the Ziehl-Abegg concept from others? “We primarily do our filming outside of working hours; we are a team of employees from various departments who are keen to create humerous short films.” The viewers then also get a sense of the fun we have during filming. It was this combination that impressed the jury in the “Campaign on a small budget”.

This was the fifth time the DPOK awards were presented to industry as part of the German Awards for Online Communication. The award honours the best digital communication services of companies in various sectors. In addition to Ziehl-Abegg, nominations in the “Industry and Mechanical Engineering” category included Thyssenkrupp Industrial Solutions (digitalization in the cement industry) and Schäffler (multimedia global technology magazine “tomorrow”). “Given the fact that we were facing two, such strong competitors in the final, coming first is an impressive achievement,” emphasizes member of the Executive Board Ley. 94,500 followers, 2.4 million likes and more than 60 million views are the key figures in the Ziehl-Abegg project. “This helps to build our brand as an employer,” says Ley. Newspaper reports, podcasts and several television reports provide accompanying support. “With an unemployment rate of 2.5 percent in the Hohenlohe district we are pleased with the impetus this brings to drawing people's attention to us in a positive way,” emphasizes the Executive Board member.

Ziehl-Abegg: Uwe Ziehl hands over the chair of the Supervisory Board to his son Dennis Ziehl