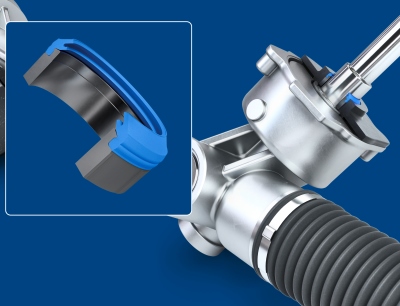 In an innovative first, Freudenberg Sealing Technologies has introduced a machine component  that combines a plastic rotating bearing with a seal in a single, precisely matched unit. The design offers significant weight, cost and friction advantages over separate bearings and seals and also improves the properties of the mated bearings and seals. Freudenberg has validated the advantages of this new component through extensive testing performed in a sensor housing unit including the seal-bearing component.

While mostly hidden from view, seals and bearings are nonetheless important components in automotive and industrial applications. They are key elements in operational safety and performance and their durability must be optimized to prevent system failure. At the same time, these bearings and seals must be small, lightweight and cost efficient in keeping with manufacturers’ efforts to remove cost and weight from vehicles without sacrificing performance. Freudenberg has  resolved this challenge with the introduction of its seal with integrated bearing (SWIB). The company spent two years developing this engineered solution and has successfully tested it in a sensor housing of a an electric power steering (EPS) system installed in an electric powered vehicle.

The sensor records data, like steering angle, which is critical to advanced driver assistance programs like electronic stability control (ESC). The seal inside the housing is responsible for protecting the sensor from the penetration of dust, splash water and other media over the entire service life of the vehicle. Bearings used in the assembly are also important; they must withstand significant mechanical loads – sometimes as much as 3,000 Newton of radial force when a car drives over a curb with its wheels at an extreme angle.

Freudenberg Sealing Technologies’ integrated solution offers significant improvements compared with separate bearings and seals. The rigidity of the integrated plastic bearing is higher so that its deflection is reduced by nearly 50 percent when lateral forces are exerted. This reduces the induced vibrations to increase the steering comfort for the driver. The seal, on the other hand, has 35 percent less friction, which reduces resistance during steering - especially important for highly automated driving. The weight of the overall solution is reduced by as much as 80 percent through integration. Freudenberg’s patented plastic bearing plays a major role in achieving these component breakthroughs.

Automotive safety applications are subject to many requirements which individual manufacturers define according to their own specifications. Freudenberg Sealing Technologies used common specifications - a temperature resistance of -40 to +125 degrees Celsius under mechanical stress, for example - to test its integrated component during the past year. Extreme cases, such as direct exposure to high water pressure, which can occur in practice during engine washing, were also tested. The seal that includes an integrated bearing proved itself in all tests. “We can now commence with customer-specific series development at any time,” says Freudenberg expert Frank Schönberg.

Product experts at Freudenberg Sealing Technologies are already researching additional industrial applications for the new component. In addition to automotive applications, seals with integrated plastic bearings can likely bring benefits to many industrial operations. Freudenberg is also looking to the manufacturing process for further innovation: If the seal/bearing unit is currently still being assembled, it could be produced using new materials in an integrated two-component injection molding process in the future.